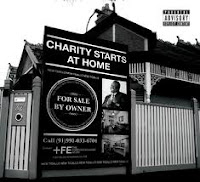 Let me start by saying that I downloaded Charity Starts at Home at the same time that I got The Wonder Years, so I haven’t listened to either separately yet. He really should have charged more than $8 for this….

I was a little apprehensive about what a solo project from Phonte would sound like. Was it going to be Authenticity part two? The Minstrel Show minus Pooh?

What he gave his fans was the same honest lyrics whether he sang or was rapping. I’m a lyrics fanatic so I have to applaud the feeling behind Dance in the Reign and The Life of Kings. He seems to effortlessly speak from his heart and you can’t help but relate in some way. This album is a great representation of why he has been instrumental in two outstanding groups.

If you’re a fan from the Little Brother days, you won’t be disappointed. We Go Off with Pharaoh Monch and Eternally with Median remind you that indeed, there are quality lyricists still doing it. If you were introduced via Foreign Exchange, you can appreciate the relaxed, two-stepping vibe of Gonna Be a Wonderful Night with Carlitta Durand. To Be Yours (I haven’t read the credits yet but it’s clearly a Zo! production) is a beautiful ballad. I’m not sure too many other artists could pull off an album with all of these different styles of music that just makes sense like this one.

My favorite though? Who Loves You More with Eric Roberson. “Make a living or have a life? I guess I have to choose one.” “I got a room and a microphone and a family I ain’t seen in months. I play this record a million times just hoping you’ll listen once. “