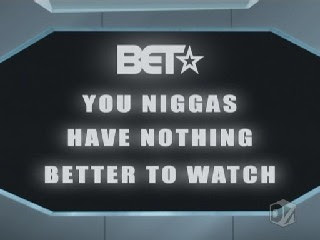 This comes after viewing the 106 and Park show before the awards with my 8 year old son tonight...So, I'm watching these performances...Hurricane Chris (money doesn't make you cuter), Letoya Luckett (da hell was happening behind her?), Diddy's boys...and in between they're asking people about Michael. Now, maybe I wasn't paying attention, but I swore I heard Debra Lee mention that she was WELL AWARE that the world would be watching what was about to enfold.
What enfolded was shucking and jiving 2009. The best of the best coonery this side of the Atlantic! I need for the host of the tribute to be sober, for the acts that actually honored MJ to have even a little bit of his talent (with the exception of Ne-Yo) and that Joe Jackson be somewhere other than on TV. And BET provided the outlet for all of this...
I realize that Aaron McGruder was probably being a little sarcastic with his imagery of Debra Lee as Cruella Duville out to kill black folks with horrific programming...but upon further inspection I have to say I think he may be right on point! I really think that an afternoon spent watching BET not only dumbs you down, but also desensitizes folks to real issues in our society.
Another point that became obvious to me is that I, as a Black 34 year old woman is no longer their target audience. I'm a grown woman, intelligent that enjoys a "grown" type of entertainment splashed with news (because umm...in case no one at BET knew...change is happening...like...right now!). We are in hard economic times; it is documented that African-American unemployment is the highest, we have the highest number of young, black male suicides. There are just bigger fish to fry than all this dancing and singing...I need facts. My son needs to see reality, not fantasy in the form of College Hill or Hell Date.
STOP FUCKIN SINGING AND DANCING LIKE SHIT IS COOL RIGHT NOW...ITS NOT!
In closing, thanks BET for reiterating that we really are our own worst enemy. And we'll tape it and show it to the world just in case someone wasn't paying attention. We are responsible for the images we portray...and again...we failed.
Posted by Kaniele at 11:44 PM No comments:

I am a Finance Counselor and I talk to adult learners everyday trying to figure out how they can afford school. For the most part, most are looking for the best way to self-promote or maintain their jobs. And than there is a whole other group of "students" who are going to school for the financial aid they can recieve while attending.

Now, I'm not one to knock a hustle...do you boo boo...do you. However, why not actually attend classes? Why not actually finish with a degree?! Why hop from school to school when you could stay put, collect the check and get a degree out of it?! And actually position yourself to make some bread instead of creating a huge bill?! This has fascinated me to no end...the hustle of financial aid without really getting the best benefit...A FREE EDUCATION! So what do you get in the end? $18,000 and the bill and bad credit to prove it:(
Posted by Kaniele at 2:20 AM 1 comment: