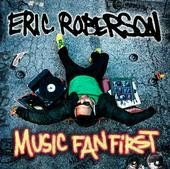 ....QUICK! If you aren't familiar with Eric Roberson, I am sure you are familiar with tunes he has penned such as Musiq's hit song "Previous Cats" or Dwele's "Hold On". He has worked with Soul greats such as Jill Scott and Lalah Hathaway.

On his latest release, Music Fan First, he continues on the path of his previous releases with solid music and lyrics. No, this won't be played on the radio. Commercial radio isn't ready for him yet. I think "Break It Down" would probably be his best chance at a radio hit.

His collaborations prove to be a highlight of this project. The tune with Lalah Hathaway "Dealing" is one of the best songs that highlights the best of each of their voices while still staying true to great song writing. Also, "The Hunger" with E Ellington Felton illustrates how he is able to switch from sweet love songs to angst.

This is one soul album for 2009 that you do not want to sleep on...and if you haven't heard some of his earlier work, I suggest you GET FAMILIAR!
Posted by Kaniele at 8:30 PM No comments: